Therizinosaurus (meaning "scythe lizard") is a genus of very large therizinosaurid that lived in Asia during the Late Cretaceous period in what is now the Nemegt Formation around 70 million years ago. The first remains of Therizinosaurus were found in 1948 by a Mongolian field expedition at the Gobi Desert. Fossils of this species were first described by Evgeny Maleev in 1954 and originally thought to belong to a turtle-like reptile. It is known only from a few bones, including gigantic hand claws, from which it gets its name. Additional findings comprising forelimb and hindlimb elements have been discovered during the 1960s-1980s.[1]

Therizinosaurus is a Legendary Herbivore. It has the most health of any non-VIP or Hybrid herbivore. 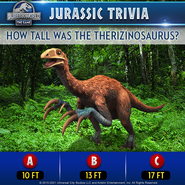 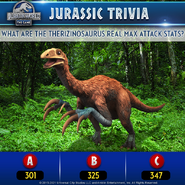 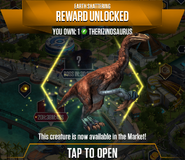